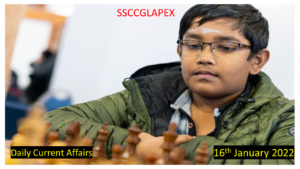 Current Affairs Questions and Answers related to India and Abroad All current affairs quiz published in Hindi will be helpful for upcoming exams like SSC, CGL, IAS, UPSC, BANK, RAILWAY etc. If you have any query regarding Daily Current Affairs 16th January 2022, please reach out to us through the comment section.

Question 1: Which of the following statement(s) is/are true regarding the Golden Globe Awards?

2. The award is given every two years by the Hollywood Foreign Press Association (HFPA).

3. This time under this, the film 'Power of the Dog' has got the title of Best Film in the Drama Category.

Question 2: Recently Article 348 of the Constitution was in discussion. To whom is it related?

A. by the prerogative of the President

B. The language used in the higher judiciary

C. Right of the general public at the time of election

D. from the security of the Prime Minister of India

Question 3: Which of the following statement(s) is/are true regarding 'Surya Namaskar'?

2. Today the first Global Surya Namaskar program was organized by the Ministry of AYUSH.

D. none of these

Question 4: Which of the following statements regarding 'African Swine Fever' is false?

A. It is caused by a large DNA virus of the Asfarviridae family.

C. It is a contagious and deadly disease for pigs.

D. This disease is also zoonotic.

Question 5: Recently who has been declared as the 73rd Grand Master of India?