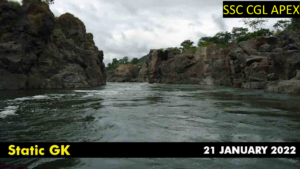 If you have any query regarding Static Gk 21st January 2022, then please reach to us through comment section.

1. Krishnaraj Sagar Dam has been built on which river?

2. Under which of the following are the Indian Administrative Service and the Indian Police Service considered to be services created by the Parliament?

3.Which of the following features differentiates Buddhism from Jainism?

(A) belief in good deeds

(B) non-violence towards living beings

(C) Rejection of the authority of the Vedas

(D) the ultimate form of conduct and self-nirvana

Which of the following is the scientific principle of working of optical fiber?

(A) total internal reflection of light

(B) total internal refraction of light

5.Who was the first Governor General in British rule in India?

6.Which of the following is a heat hard plastic?

In which state is the Surkotda archaeological site located?

8.Who among the following is the only Indian to win an individual gold medal in Olympics?

9. Which of the following is the maximum amount of loan that can be given by a scheduled commercial bank covered under the Credit Guarantee Fund Scheme for Micro and Small Enterprises?

10. When was Prasar Bharati established?